Following the lead of museums across San Francisco, we are temporarily closed, and will reopen at the appropriate time. Read more...
April 23, 2018 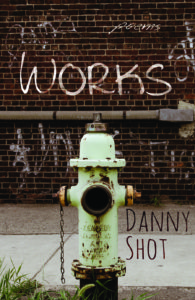 Works honors the longtime Long Shot magazine, credo of “Writing from the Real World.” This collection of poems traverses a course from the swamps of New Jersey to the endless possibilities of the open road, with rest stops along the way to visit with family ghosts, highlight striking moments encountered during a 30-plus year career as a New York City public high school teacher, and report upon the twilight years of the Beat Generation. Shot’s engaging poetry is raw, from the gut, deceptively rich, and humane in the face of an increasingly post-humanistic world.

Danny Shot was a longtime publisher and editor of Long Shot arts and literary magazine, which he founded along with Eliot Katz in 1982 in New Brunswick, New Jersey. Born in the Bronx and raised in Dumont, New Jersey, by German Jewish refugees, Danny graduated Rutgers College in 1980 with a B.A. in English. Shot’s poetry has appeared in bum rush the page (Def Poetry Jam), Aloud: Voices from the Nuyorican Poets Cafe (Henry Holt), and The Outlaw Bible of American Poetry (Thunder’s Mouth) among other anthologies and numerous journals. Shot has read his poetry throughout the United States and appeared on television (WNBC, New York) as part of Felipe Luciano’s Wordchestra. He has spent over 30 years as a NYC public high school teacher, serving in the South Bronx, Harlem, and Brooklyn. Mr. Shot lives in Hoboken (home of Frank Sinatra and baseball) where he is the poet-in-residence of the Hoboken Historical Museum.